The other day I was lucky enough to have two masterclasses at college in one day – Alan Hampton and Bennie Maupin. A great part of being at college is that really amazing artists get invited in to talk and work with us. Both musicians that I admire and have admired for a while now, so I was thrilled to experience this!
In the morning a small group of us – singers and some rhythm section players – had a songwriting workshop with Alan Hampton. He started by playing us a song he’d wrote (Elevator Ride) and then explained the form of the song and how he came to write it. When he played it a second time it was interesting to be able to understand the song a lot better, he also gave us a kind of running commentary on the meaning of the lyric as he sang. It was really helpful to see up close the methods and devices different people use for writing. I was really lucky to workshop a couple of songs I have written and get some feedback from Alan.

After seeing how he worked I might try and implement some methods he uses into my own writing. After I sang some of my classmates workshopped some of their songs. This was amazing to hear as there were some really great songs. In a workshopping situation I often find it really useful as some of the things I point out to my peers are things that I need to work on. I was frantically scribbling away, writing down some of the advice Alan gave others. Apart from some specific writing advice he gave us lots to think about: writing in collaboration, committing to ideas and problem solving. 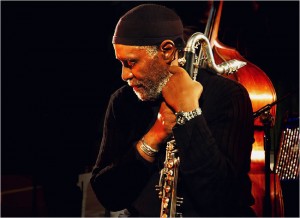 In the afternoon we got to spend some time with the lovely Bennie Maupin. He told us about working with minds like Miles Davis and Freddie Hubbard. It was so interesting to hear how he got into music and what it was like to grow up and go hear and talk to people like John Coltrane. It was apparent that he got asked about Miles Davis pretty frequently… yet he still had to think about the answer and it was as fresh as ever. What I liked most about Bennie was how genuine he was. He was such an inspiring person to have around us. I was surprised when he told me not many people ask him about the album Thrust. I suppose because I love that album so much I assumed it would be brought up often when he meets people!

Something that will stick with me for a while I hope is something Bennie said along the lines of ‘what comes from your heart is more important than what comes from your brain.’ This is something I’ve always thought and it was really important for me to have that affirmed by someone I admire a lot! It’s kind of crazy the amount of people Bennie has played with over the years, but this is a tune I love and have checked out this video tons… just got pretty excited to be around someone who I’ve listened to a lot!